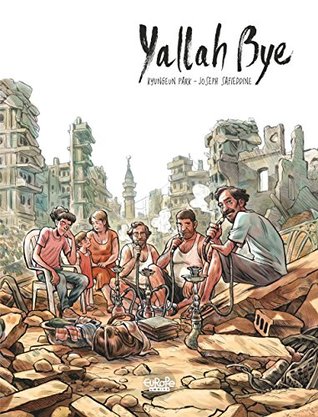 Recommend to fans of: political graphic novels, engaging ways to bring complex events to the masses

Foodie Vibes: a few drops of water at the bottom of your glass

July 2006. Gabriel El Chawadi says goodbye to his family at the Paris airport as they leave for their summer vacation in southern Lebanon. But a conflict at the Israel-Lebanon border escalates into a full-blown aerial attack, and for the next few harrowing weeks, the family hides for cover with friends and relatives, watches helplessly as people and buildings are destroyed all around them, and hope against all hope that France will evacuate them to safety. Back in Paris, Gabriel watches the events unfold on television with growing horror and sends out desperate calls for help to anyone who will listen.

Thank you to NetGalley, Le Lombard, the author and illustrator for an ebook copy to review. As always, an honest review from me.

Yallah Bye is a beautifully illustrated, heartbreaking graphic novel. It shows the atrocities of war through it’s depiction of families struggling to survive a conflict at the Israel-Lebanon border. It shows how different people are coping with the terror, but yet are still all terrified, hurting and trying to get through each minute. The people’s fear of getting bombed is palpable throughout the intense writing and illustrations.

Yallah Bye is a great way to learn about parts of history that often overshadowed by bigger wars. I can see it being required reading in high school history or literature classes, as a foray into teaching about these conflicts. A great way to get teens and young adults excited about history!

However, I still didn’t fully understand all of the political and historical aspects mentioned throughout. I’m not that familiar with these, and the graphic novel can only cover so much. I wish there was a little bit more education for people who are a bit unfamiliar with the political scene during the conflicts.

All in all, Yallah Bye is great graphic novel that educates, entertains, and connects on a human level with the readers.

Have you ever read a graphic novel/comic for education purposes?

Be sure to scroll down to the bottom for my Random Question of the Review!

I want to hear all your thoughts and opinions

The Forgotten Slaves of Tromelin by Sylvain Savoia

Recommend to fans of: learning about history in a unique way, socially/culturally relevant comics, forgotten moments in history, graphic novels with a purpose

Read with food: water and be so thankful for every drop

This story takes place on a tiny, far-flung island in the middle of the Indian Ocean, whose nearest neighbor is Madagascar, 500 kilometers away… In 1760, the Utile, a ship carrying black slaves from Africa, was shipwrecked here and abandoned by her crew. The surviving slaves had to struggle to stay alive in this desolate land for fifteen years… When this tale got back to France, it became the cornerstone of the battle of Enlightenment to outlaw slavery. More than two hundred years later, the artist Sylvain Savoia accompanied the first archeological mission in search of understanding how these men and women, who had come from the high mountains of Madagascar, had survived alone in the middle of the ocean. This is the story of that mission, through which we’re exposed to the extraordinary story of the slaves themselves.

Thank you to NetGalley, Europe Comics, and Sylvain Savoia for a copy of the comic to review. As always, an honest review.

I read the entire graphic novel in a day. By nature, they’re not too long, but since I hadn’t heard about Tromelin before I absolutely had to find out what happened to all the slaves shipwrecked on the island.

I’m not a huge fan of graphic novels and comics, because most of them are based on superheroes. Not my thing! However, when I saw this one I knew I had to read it. I first noticed the illustrations. They’re gorgeous, detailed, evocative of so many emotions, and incredibly powerful. They tell the story wonderfully. The combination of the illustrations and text makes the emotions jump off the page. I felt as if I was right there trapped on the ship with the slaves ~ tired, scared, hot, hungry.

Not too many graphic novels discuss slavery, especially a part of history that’s as forgotten as Tromelin. I certainly hadn’t heard of it before reading this. The story is told by alternating from present day scientists, journalists, archeologists, etc. excavating the site, and the historical events as they were occurring.

While the history was wonderfully done, the parts about the present day excavations were only okay. Their findings of long lost artifacts did help to complete the story. Also definitely a trigger warning for slavery, assault, abandonment, etc.

Random Question of the Review:

What book has opened your eyes to something new, recently?